2022-11-06
Stockholm Konserthus, 9:th of november at 19.00
On the 9:th of november I´ll be guesting Royal Big Band and play the role of Dizzy Gillespie at Stockholm Konserthus! It will be great fun!! Dizzy is one of my big idols!! Agreat trumpet player and inventor of the music styles Be Bop AND Latin Jazz!! Amazing!!
Below is a little teaser to the concert! It will be great fun!!

My 4:th album, Going To The Movies , releases on the 1:st of march and on the 6:th of march we have a release concert in Simrishamn.
You can stream the record here
The recording is also avaliable as CD which you can buy here. 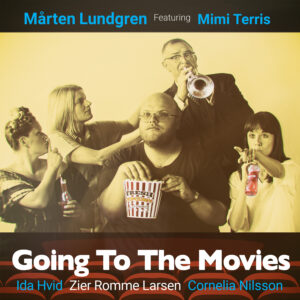 Premiere of a new show!
I´m very glad to collaborate with Karin Grönberg in making a new musicl play about one of my greatest heroes in show-biz: Judy Garland!
Today we had our premiere of our show in Hässleholm!
Karin has written the play and acts and sings everything and I´m the musical director and sing a couple of duets with Karin beside playing the trumpet!
Here you can see a trailer about the show!

A new record is on it´s way!

During this spring my quartet has been recording a new record that will release in the the first months of 2022!
This time we focus on music from the movies and we call the project “Going To The Movies”, because there is so much wonderful jazz in old movies that time has made us forget.
We have recorded music from films as old as 1930 and all the way up to ”Star Wars” from the 70s, so you can expect a lot of music rarely heard but at the same time so good that we think it´s a shame that it´s forgotten only because no one remembers the movie.

My quartet consists of the same members as on the last record, simply because they are the greatest there is, but this time we also have the great honor of having Mimi Terris singing in three of the songs!

One of the songs that Mimi sings you can see and hear in the clip below!
The tune is “Be My Love” and it´s from the movie “The Toast Of New Orleans” from 1950.

And here is the tune as it´s sung in the movie.. It´s more in the style of Opera or Operetta in the movie…

Record is to release in the first months of 2022.
Title: “Going To The Movie´s”

It will be great fun to present this music for you!

We´ve just finished a week on tour, playing at schools in Denmark with my quartet Big Band Goes Small Band.
Great fun to see how the music gets to the children!
This was made possible by Levende Musik i Skolen (LMS) who arranges concerts in schools in Denmark.
Now we´re looking forward to catch up with some cancelled gigs from this spring (due to the Corona-virus) and play them during this autumn instead.
Check out my calender in order to see the dates.
By the way… Here you can see our presentation video to the danish schools, made by LMS

Finally my third album is out, ”Big Band Goes Small Band” with the amazing
musicians Zier Romme Larsen piano, Ida Hvid bass and Cornelia Nilsson drums!
You can listen to it it here!!
Or check this Youtube video out where i sing ”Take The A Train” 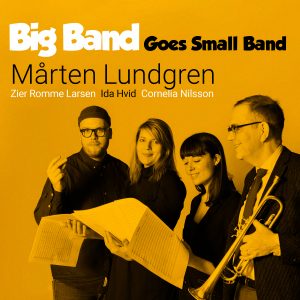 I´ve just been recording a new project that will turn out into a record if everything goes well! I´m very excited!
It´s with the great musicians Zier Romme Larsen (pi), Ida Hvid (b) and Cornelia Nilsson (dr)!
More info will come later in the progress! 🙂

A new year has begun and with it a lot of fun things taking place!
I´m going to write three big band charts for Mimi Terris, record mine and Ida Hvid´s project Big Band Goes Small Band (You can watch a video below) and play a lot with Malmö´s own big band Monday Night Big Band who celebrates 30 years this year!
Many other great things are happening like a Dizzy Gillespie Tribute and me conducting new big bands and much more….
We will also play rather many gigs with my Bob Dorough Project so I´m very excited over 2018!
I hope we´ll meet out there!

I´m very proud to be part of Mimi Terris New CD!
Mimi is a great singer, song writer, lyricist and a great person!
Check out her webpage here!

A new project that is run by me together with bass player Ida Hvid, Big Band Goes Small Band, has had it´s first proper concert in Gladsaxe on the 23:rd of march 2017.
Alas, Ida Hvid got sick the same day, but we were so fortunate to get Felix Moseholm to substitute with very short notice.
Here you can hear Flight Of The Foo Birds from the repertoar of Count Basie.
The movie is created by Kim Malmqvist.

Sometimes I get the opportunity to play with the Danish Radio Big Band and it´s always great fun!
Sometimes I even get to play solo with them which is even more fun, and sometimes it´s even broadcasted in television and that´s just fantastic.
Here is a broadcast from a concert made 2017-03-31… Undertow by and with Kathrine Windfled and with a flugelhorn-solo by me:

My second album, Mårten Lundgren Plays The Music of Bob Dorough, had it´s release on the 1:st of august 2016, 13 years after my first album Travellin´!

You can buy the record by clicking here!!

And you can read a review (in Swedish) of it here (from Sydsvenskan)!

And the jazz magazine DIG said:
”If you don´t like Mårten Lundgren Plays The Music Of Bob Dorough you should pay your doctor a visit!”
You can read it (in swedish) here

We should have played with Mr Bob Dorough himself in Ystad Jazz Festival in august 2016, but alas, he broke his hand just a week before the festival.
Instead we did a tribute to Bob and his music with the wonderful singer Anita Wardell from the UK!
It was a great gig and the music of Bob Dorough touches souls, so there were many happy faces in the audience!

Finally I have made a Youtube-channel with clips from recordings and gigs with Bob Doroughs music that you can see here!

See you out there!