Some reviews from my career.. 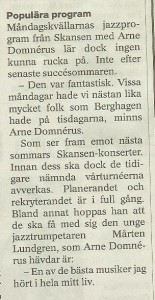 A review from Sundsvalls tidning and our gig with my project ”Mårten Lundgren Plays The Music of Bob Dorough” 2015-10-26 :

From a review in the British magazine Jazz Journal of a performance we did at Ystad Jazzfestival 2016-08-05:

Bob Dorough had been scheduled to appear but unfortunately was indisposed so, at very short notice Wardell was called in to help deliver an excellent tribute to Mr Hip in the company of trumpeter and vocalist Marten Lundgren, with bassist Helen Marstrand who also doubled on vocals. Lundgren is a really interesting personality whose excellent trumpet playing and vocals can be enjoyed on his Gateway Music release Marten Lundgren Plays The Music Of Bob Dorough. The CD features the young Sven Erik Lundeqvist on piano and he excelled in the concert at the Klosterkyrkan; he also led three nights of lively jam sessions at the festival.
Read the whole review here (opens in a new window)

A review in Sydsvenskan on the 3:rd of september 2016 of our record with music by Bob Dorough:
Review from Sydsvenskan (opens in a new window)

”If you don´t like the record Mårten Lundgren Plays The Music Of Bob Dorough you should pay your doctor a visit”
From a review in the jazz magazine DIG on the 13:th of september 2016, and you can read it (in swedish) here!